Since it’s inception, Team Margot Foundation has granted a total of £271,000, which is in addition to the £275,000+ raised & donated by Team Margot, prior to the formation of the charity.

This means that to date, Team Margot has either donated or made grants of over £545,000 to people, projects and charities close to our hearts.

Of course, the grants & donations made by Team Margot are only possible because of you and your generosity. On behalf of everyone involved at Team Margot and in particular the grant recipients, thank you.

What follows is a summary of how the grants have been made by Team Margot Foundation and how they came about. 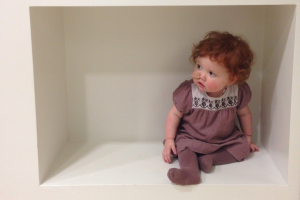 Margot was at Great Ormond Street Hospital for several months and we know how hard life can be when caring for a sick child. A 2016 study highlighted the destructive financial impact by reporting that a third of cancer survivors are left in debt due to their treatment, inability to work or other factors and 3% are bankrupted by their illness.

Vicki and I saw this first hand during our time at Great Ormond Street Hospital with Margot. Families were struggling to make ends meet, all the while juggling commitments outside the hospital, with caring for their sick child.

You’ll note below that available funds have primarily been granted to families caring for child cancer patients. These one-off grants per family are made on a “no strings attached” basis and are for the family to use in any way they wish.

Over the last few years, these grants have come to be referred to as “Emergency Grants” by the hospitals we work with, because the application process is extremely simple and once the patient and family verification is complete & the recipient’s bank details have been received, the £1,000 grant is typically received within 24 hours.

We set out below the grant giving by Team Margot Foundation since establishing the charity in January 2015. The trustees of Team Margot Foundation are pleased to be making these one-off grants in the belief that they help in some small way. The graphs have been rebased following the trustees decision to report calendar year accounting periods, from 1 January to 31 December each year.

Initially, the charity made grants via Great Ormond Street Hospital in London only, however over the years we have expanded our network to the following 11 hospitals (helpfully, the latter 7 via the Kingston Hospital based charity, Momentum): 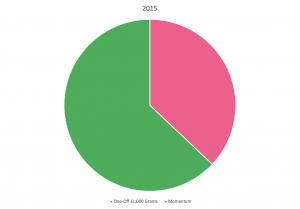 During the charity’s first year, there was a total of £8,100 granted by Team Margot Foundation, £5,100 to Momentum, to launch their family counselling services, with the remaining £3,000 being granted to three families caring for child cancer patients.

• two families were dealing with the sudden death of a child

• one family was dealing with bereavement following an illness

• five families had a child with very challenging health diagnosis, such as relapse of a previous condition, a very poor diagnosis or introduction of palliative care to their child. 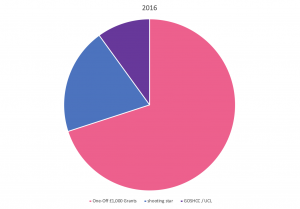 The charity made 30 one-off grants of £1,000 to families caring for child cancer patients, in 2016. At the time, these families were mainly based within the haematology wards at Great Ormond Street Hospital, the remainder were allocated with the help of our trusted referral partner,  Momentum.

Bianca Effemey, founder and CEO of Momentum wrote to us at the time:

“I can’t even put into words what a wonderful gift Team Margot Foundation is to the families. At first I was not sure how this could be offered or how families would react. I want you to know that I see some of the stress instantly ease from these poor families faces as so often the money is such an issue and one does not like to talk about that as they feel it is wrong to express that on top of everything else that’s happening. You have helped so many people from this and it’s so private. Thank you. You donated funds to a couple of families who have since lost their child; they spoke to me and said it made such a difference and just relieved some of the pressure.”

“The support Team Margot provides is just brilliant because it is sensitive to the fact that when a child is seriously ill, families can have so many different needs and it can be difficult for them to identify the ‘priority’ need; the grants you give provide them with some much needed flexibility and choice! Thank you!” 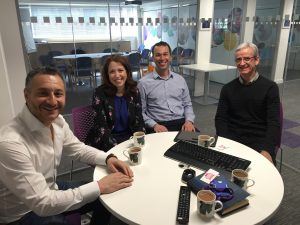 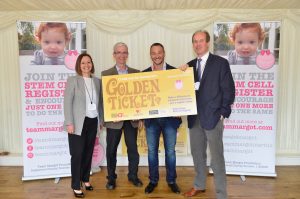 with Dr Owen Williams (L) and Margot’s haematology consultant, Dr Phil Ancliff (who is also a Team Margot Rower) at our Parliamentary Reception

In addition, a £5,000 grant was made in support of a leukaemia research project run by UCL in collaboration with Great Ormond Street Children’s Charity. This followed a £60,000 Team Margot donation in 2014, prior to the formation of the charity, Team Margot Foundation.

In infant leukaemia, 50% of babies will die in spite of very aggressive chemotherapy. Excitingly, the team has discovered a potential new targeted treatment. Research has shown that around 8 in 10 cases of infant acute lymphoblastic leukaemias (ALL) are driven by MLL (mixed lineage leukaemia) fusion proteins, which is produced inside the cancer cell. Guided by this understanding, Dr Jasper de Boer and his team has found that one drug in particular was extremely effective at destroying MLL fusion proteins in leukaemia cells in the lab and, crucially, halted their growth, killing the leaukaemic stem cells. These are the cells from which the leukaemia grows and are resistant to conventional chemotherapeutic drugs.

Dr de Boer’s current priority is optimising the drug formulation, before being able to commence a clinical trial in humans, however, there is already good evidence that this drug is safe to use in humans, as it has been on the market for many years. We will continue to track progress and update.

Furthermore, a donation of £10,000 was made to Shooting Star Chase, the leading children’s hospice charity that provided a place for Margot’s body to rest, prior to her funeral. 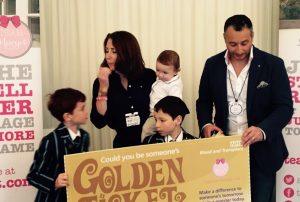 The following year, we saw a massive spike in the demand for these one-off £1,000 grants, which accounted for all available grant funds that year.

The trustees were delighted to approve the grant of £82,000 to families caring for child cancer patients, as we grew our hospital network and word spread that these funds were readily available.

However, as available funds rapidly depleted, the trustees had to take the difficult decision to close all grant making in the third quarter of that year. The trustees then implemented a new grant policy to safeguard against having to disappoint grant applicants in future.

This new policy altered the way in which the Team Margot Foundation makes grants, specifically by relying upon the hospital networks of trusted referrals and making planned allocations to them at the start of each year. 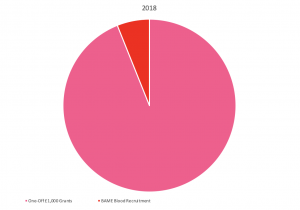 A further £30,000 was granted to an additional 30 families plus the trustees also made the decision to grant a further £2,000 to support a collective of sickle cell patients who actively recruit blood donors from the Black, Asian, Mixed Race and Minority Ethnic communities.

Specifically, there is an urgent need for an additional 40,000 black blood donors, because they are most likely to carry the much needed RO subtype of blood, which sickle cell patients need to remain clinically well. 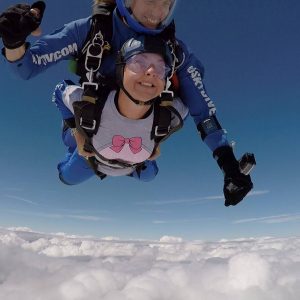 The charity has exclusively made grants allocated to families caring for child cancer patients, via our now established network of eleven hospitals, as follows:

2020 proved to be a challenging year for all charities, including Team Margot Foundation.

The need for these ’emergency grants’ became ever more acute during 2020, owing to the pandemic. The charity commissioned an impact survey, working with our stakeholders and following this exercise, the trustees reviewed to what extent it was possible to continue the grants programme for 2021:

2022 £30,000 has been allocated to our hospital network, but to date only 8 of these grants have been made, the balance of funds are expected to be deployed prior to 31 December this year.

Throughout, the trustees have received more lovely feedback from our hospital networks; a few examples are below:

“Thank you so much to you and everyone at Team Margot for the incredible support you have provided once again this year to families we work with. It makes such a difference for the families and has helped alleviate some really complex and difficult circumstances for them, allowing parents to focus their time and energy on the child undergoing treatment and their siblings, rather than having to worry about financial constraints.”

“We are very grateful for your very generous donations to our families. We try to give it to families who really need help and who would never ask either. One of my families whose child was very poorly at home were very overwhelmed when they received the money and they treated themselves to a coffee machine (which was something they would never have been able to afford) as they rarely left the house. I think for our families it is such a large and generous amount of money that can only help them, especially in these times when COVID also makes life more difficult.”

Team Margot Foundation’s grant giving function has no employees nor paid advisers and accordingly there are no salaries, nor expenses paid by the charity. The trustees are unpaid, as are all the many other wonderful Team Margot volunteers, fundraisers and supporters around the world. Consequently every penny raised and donated in support of this effort will go directly towards families caring for child cancer patients. 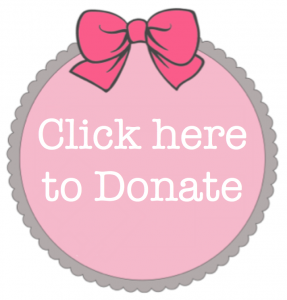 Should you wish to make a financial donation to Team Margot Foundation, please either click here or on the image above. Thank you.

Should you wish to fundraise for Team Margot Foundation, the charity is registered here on JustGiving. Thank you.