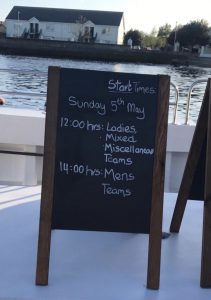 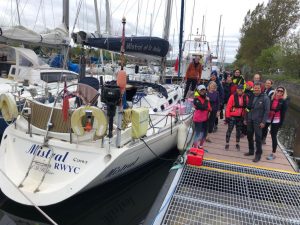 Team Margot Rowers next to our support boat, Mistral and support crew

A year later, much to our disappointment, Celtic Challenge 2016 was cancelled because of bad weather.

The event is usually held every two years, but because of the ‘no go’, it was run the following year in May 2017. Only 4 of the 13 boats that started actually completed that crossing, owing to stormy weather.

Regrettably, Team Margot Rowers were one of the casualties and our team was forced to retire two thirds of the way across, having led for much of the race. Mercifully, in spite of various issues the team experienced during the race, no one was badly injured. 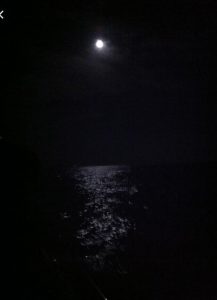 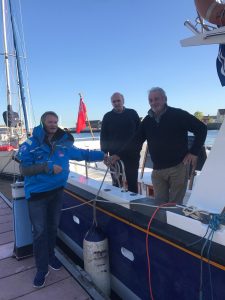 Our skipper, Martin with the race organisers. Martin won’t be rowing but is joining on the support boat. His broken shoulder hasn’t impaired his verbal abilities in any way. Chin up Martin !

Today, after much training & preparation, Team Margot Rowers are once again set to start Celtic Challenge 2019 at 12 noon, after a sufficiently good “weather window” opened.

Frankly, this is the latest possible time that this endurance race can possibly begin. If now there are any last minute weather issues, this years race will likely be cancelled. All being well, we hope to arrive sometime before lunchtime tomorrow, on Bank Holiday Monday, having successfully rowed across the Irish Sea.

The delay of the race start from either Friday or Saturday has meant a longer stint in Arklow than we originally envisaged, which has of course meant more time away from family for everyone involved, and during a holiday period. The commitment, strength and resolve of the rowers has been immense, but it has been more than matched by the commitment support and understanding from their families at home.

We are delighted to welcome the newest rowers to the team: Digby Koe, Jane Magabe, Holly Pelling and Sarah Mottram who have joined relatively late in the scheme of things, owing to unforeseen issues arising and the resultant drop outs. We are blessed to have them aboard and given their stirling performances during training, we line up at the start in a good place with spirits high.

Thank you also to our fantastic support team, Catherine, Richard and Chris, who are so ably led by Keith Mander. They leave us feeling as safe as I believe is possible prior to embarking on such an adventure. 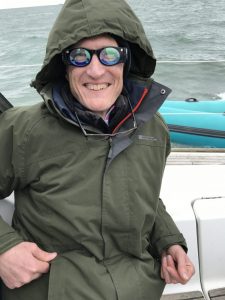 Ian during Celtic Challenge 2017, wearing the ridiculous French Navy glasses which are supposed to alleviate sea sickness (they didn’t work!)

Lastly, whilst we are of course rowing in Margot’s name to encourage everyone who is eligible, particularly those who have mixed heritage to register as stem cell and bone marrow donors, I wish to dedicate this race to one of our rower allumni, Ian Ross who is fighting his own battle at home. This one’s for you, Ian.

To read about our last attempt during Celtic Challenge 2017: https://www.teammargot.com/the-celtic-challenge-2017/

If you’d like to donate money in support of Team Margot Rowers, we would be enormously grateful.

Track our Celtic Challenge 2019 progress via the YB Races app.

Thank you for all your support ? and to everyone involved ☘️
________
TEAM MARGOT ROWERS
CELTIC CHALLENGE 2019 TEAM: