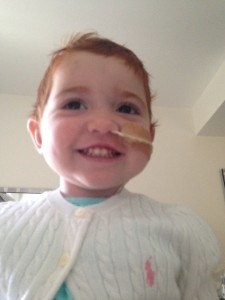 Margot, Vicki, Izabela and I were at Sheffield Children’s Hospital a year ago today.

At the time, we were told that Margot was “conventionally incurable”, so after much deliberation, Vicki and I had opted to try an experimental treatment called Blinatumomab. We knew from the outset that the odds were not great, roughly 2 – 1 against, but even those odds were significantly better than the alternative.

Below are excerpts taken from my journal, which summarise the first two days of this treatment. During this time Margot suffered various adverse reactions, which was potentially a good sign; the hope was that Margot’s sickness, high temperatures & fevers were an indication of her immune system fighting back.

I always struggled with that – having to watch my baby daughter suffer and have to get more sick, in order to stand a chance of getting better.

Worse still, these were the days when Margot was clinically well (i.e. ostensibly she didn’t look unwell) and so she had energy and was able to enjoy life; yet here we were, away from home in Sheffield, putting her through a treatment that was going to make her ill and which had no certain outcome.

Moreover, we didn’t know (nor was anyone able to tell us) how much more time we had with Margot, so every day was precious. 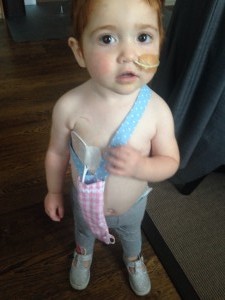 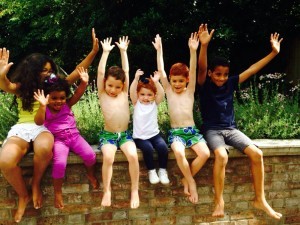 Playing with her brothers & cousins before heading off to Sheffield

Vicki & I had a chat with the boys yesterday about the plan of action. We explained that Margot, mummy & daddy would be going to Sheffield for a few days for a new treatment and that they would be staying at home with the rest of the family during this time.

We explained that the treatment in Sheffield gave us a chance at saving Margot, but also that it might not work. An awful topic to have to discuss with Margot’s seven and five year old siblings.

Oscar was extremely matter of fact & as is his way, very articulate. He immediately offered his opinion and told us that he didn’t believe the doctors in Sheffield would be able to save Margot – why should they know any better than the doctors in Great Ormond Street Hospital who we all thought were up there with the best doctors in the world ?

Vicki explained that the Sheffield treatment was experimental and new, so new that it is the only place in the country to be using this treatment.

Oscar accepted this explanation and went with the suggestion that the new treatment might actually save Margot. It’s painfully clear when talking to him that his being blunt and so matter of fact doesn’t mean that he isn’t able to understand that this is a matter of life and death, but quite the contrary. His explanation demonstrated that he understands all too well what it would mean if the treatment didn’t work, but that he preferred to deal with it this way and not to think about it because doing that made him sad and upset. Consequently, his coping strategy is to choose not to think about it.

Whilst he is 16 months younger than his older brother, Rufus also appears to understand but is less able to control his emotions. In that sense, he is more vulnerable. And yet, he is also able to express himself and is seemingly willing to talk about the situation. Nadia & Ivor fed back that the other day, when Rufus was out with his younger cousin Yasmeen he just came out and openly shared with her that Margot might die. I also overheard him tell Macy and Theo much the same, shortly after their arrival.

It wasn’t long after our previous conversation with the boys that Rufus came downstairs after lights out and needed a cuddle and a chat before he righted himself and was ready to go back to bed. 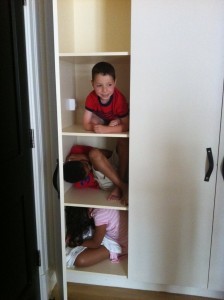 We all respond differently to stressful situations. As you might have noticed, I tend to write, Vicki decouples her emotions and my mother bakes cakes – I can’t remember having so many goodies in the kitchen !

It’s extremely difficult to know quite how this will affect the boys – not to mention Yasmeen, Macy & Theo ! let alone the adults in the family so more than ever we need to be receptive to and mindful of their behaviour, in the hope that we can manage any concerns as they arise.

13:55 I call and speak to Professor Vora, as planned to check all OK.

He explains that everything is in order and that we are expected on the Ward; if we wish, after we clock in we can stay away from the hospital tonight, provided we are back before 09:00 tomorrow.

We are packed for what looks like a month ! and will leave shortly. 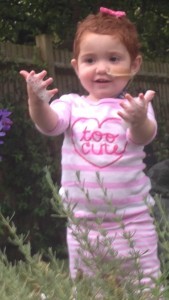 Before treatment begins, we want to ask Professor Vora to tell us straightaway if he believes the treatment ISN’T working.

For example, if after the first three days there’s zero response to the treatment, then rather than blindly continuing for another week, if he doesn’t believe that things are as they should be, we’d far prefer him to tell us straight that this isn’t working, so that we can unhook Margot from the medication and come back home to spend time with her there.

Perhaps that’s easier said than done, but Vicki and I were quick to agree on this point. 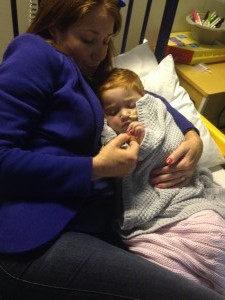 Apparently a good day in that the blina caused Margot to have a reaction.

The reaction means the treatment has a better chance of working.

Plus, this “febrile” reaction was the best one of the main three that might have occurred – we DIDN’T see any sign of CNS / brain related issues, nor Cytokine Release Syndrome.

So in that sense, we scored on two fronts.

AND Margot didn’t (yet) have a subsequent reaction after blina was re-started at 17:00. At least not at the time of writing (21:44). So hopefully the infusion can continue to run overnight without interruption.

That aside, she is looking less well. The blood tests tonight and tomorrow morning will provide a bit more information and hopefully indicate progress on the blina front. 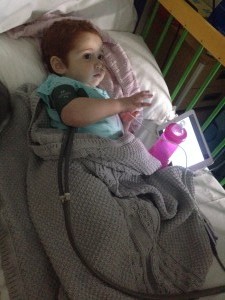 19:58 Nurse Jayne says that she will be doing ‘neuro checks’ at 22:00, 02:00 and 06:00 so if Margot happens to be awake an hour either side of those times, I should let the night nurse know so that they can shine the torchlight into Margot’s eyes then, instead of having to disturb her sleep.

Nurse Jayne also tells me that she has written our request for a longer wipe of the Hickman line into the notes, so that her colleagues will see and take note. Her shift ends at 20:30.

I am periodically feeling Margot’s forehead to check for any obvious temperature spikes. 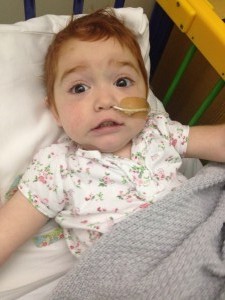 The following morning, Margot awoke in a good mood … 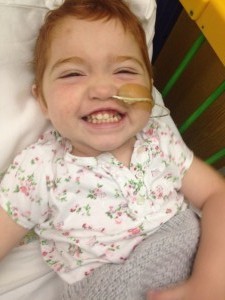 … and was larking around, clearly feeling much better.

20:08 My summary of today : uneventful, aside from the dramatic start to the day.

In one sense that’s good, but in another, Vora keeps telling us that reactions are good (within reason) so I’m hoping that all the pain and bother will be worth it.

There’s talk of a blood infusion tomorrow (owing to the anaemia) and I understand that Margot’s bloods won’t be taken tonight, so we are back into once daily samples (ie tomorrow morning).

Progress is to be monitored via Margot’s bloods. We need to continue to monitor and understand whether this treatment is working and worth it. We get the impression (and the nurses confirm independently) that if something isn’t right, Vora will come out and say it.

I have emailed Vora tonight to ask if there’s anything to report (I didn’t see him this afternoon). 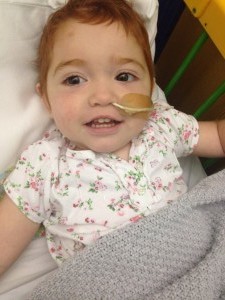 21:17 Vora replies “Nothing important. Will catch up tomorrow.”