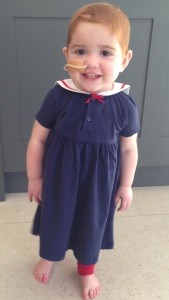 This day last year was Friday 13 June – it was another key day in our lives. The date makes it an easy one to remember – it was the day that we learned Margot had relapsed.

Below are my notes from that day. Of course, we were very concerned, but at the time we still had options and we still had hope.

Not least because the AML clone hadn’t reappeared.

What follows is a snapshot of the day.

Earlier today I chased the BMT team for Margot’s bone marrow aspirate test results – as yet we haven’t heard back from them since our visit to Great Ormond Street Hospital (GOSH) earlier this week.

12:00 I receive a voice message from Persis Amrolia. Professor Amrolia is the head of the BMT team at GOSH and as soon as I heard his voice on the phone message my heart sank. We don’t tend to hear from him directly and instead we communicate via the Bone Marrow Transplant (BMT) team.

I called him back and he explained:

The microscope test is ok, but it’s the most crude test they have when looking at the bone marrow aspirate.

However, the Chromosome test is “equivocal” – ie he says that “we can’t call it”. Apparently, 3/1,000 cells looked like they could be a cause for concern. He explains that he and I could be tested and show perhaps 5/1,000 cells – it’s not entirely clear and is right at the limit of sensitivity. We will know more at the end of today when we do the molecular MRD test. We can expect a call from the BMT team later on today.

He went on to say that the myeloid (AML) test is negative, it’s the lymphoid (ALL) element that looks like there could be something there.

The overriding message is that they now have some concern that there’s a low level of the disease coming back.

This may well cause more graft versus host disease (GVHD), but that’s probably a good thing in this context. If Margot is fighting against her own skin, then the theory is that perhaps there will also be a fight between the donor cells and any residual disease.

The next step is to repeat the bone marrow aspirate on 24 June. Morning appointment being scheduled for that day.

He stressed that they can’t be 100% definitive about this, but they are suspicious that the ALL side of this might be coming back at very low levels – the strongest weapon we have now is the immune response of the donor against any residual disease.

Rash and temperature spikes are very likely to accompany GVHD. He advises us to use hydrocortisone cream for the rash on her face & Betnovate for her body.

Having had a quiet moment or two to myself, I’m trying to digest the news from Professor Amrolia and react logically to it.

To summarise what we know: the Professor tells us that there’s a cause for concern.

It is ambiguous and as yet unclear as to whether what they have detected is the disease or simply at the limits of the test sensitivity. It might be nothing, but equally the medical team are suspicious that it could be low level residual disease.

So, we need to take the best possible action in light of this information. And that’s what we are doing.

And for now, that’s about the length of it.

That we are all fearful of the ‘what if’, is human. We are doing the best we can under the circumstances and there isn’t anything more that we can say or do for the time being.

We should seek to deal with Margot’s likely ailments and do our best to enjoy today. And every day.

So that’s the basic plan, at least until we have more information.

We may get more test results later today, but essentially the next touchpoint is 11 days away when the next bone marrow aspirate is scheduled to occur. In the interim, we must brace ourselves for graft v host disease and all that accompanies that.

At lunchtime, I called Maria in the BMT team and she will get us prescriptions of hydrocortisone cream (for Margot’s rash on her face) + codine (pain management) + piriton (to combat itching). The advice was also for us to go and stock up on lots of different nappy creams and experiment with what works best for Margot’s bottom, which is currently extremely sore. 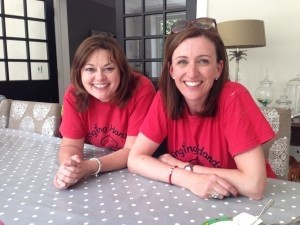 Suzanne & Tracy AKA The Singing Hands 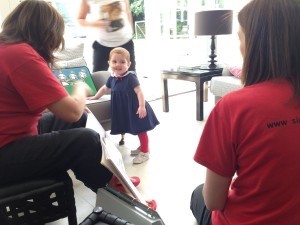 Initially, Margot was a little cautious…

The Singing Hands arrive for some light relief…

At lunchtime, The Singing Hands arrived for a musical session with Margot.

To explain the significance, they feature numerous songs (with signing) on the GOSH TV system. Consequently, for Margot (and the rest of us) they are living icons – we have all listened to them ad nausea in hospital and by hook or by crook we got in touch… et voila ! 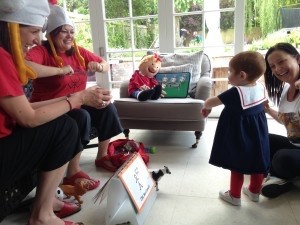 Margot does her chicken impression