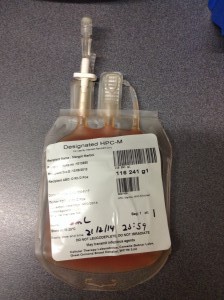 The donors bone marrow. This is it.

The bone marrow itself looks very much like blood and the transplant process itself is no different from the way in which blood transfusions occur. The bag containing the bone marrow donation is pumped into the patient via their central line (Hickman line) directly into their blood stream. What’s fascinating is that the stem cells know what to do – they pass around the body and eventually find their way into the bones, where they hunker down and start reproducing.

My blog below is a record of this day last year, but in addition there is also video footage that I haven’t shared before. It shows the nurses preparing & checking the bone marrow donation in advance of the transplant, then hooking it up to Margot via a pump. I then start the infusion.

Public awareness & understanding of bone marrow transplants is poor and the procedure itself is often widely misunderstood. So, one of the key reasons for publishing this video is to help dispel some of the myths.

Margot slept through part of her bone marrow transplant, totally unaware of what was going on. There was no anaesthetic administered and you’ll note that it’s not an “operation”. 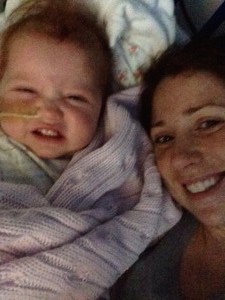 07:55 This photo and message arrives by text. A lovely start to the day.

It looks like we’re ready for the bone marrow transplant today.

10:30 I arrive at GOSH. No one seems to know when the stem cells will be ready for the BMT (bone marrow transplant). The nurses say they will call at noon to check up if we haven’t heard by then. 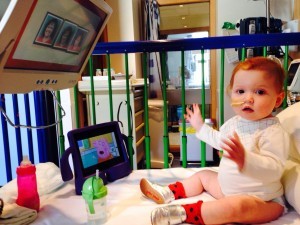 If you’re happy and you know it…

Margot is quite sedate. She clearly isn’t herself and seems content to sit quietly watching the talking hands songs (and making the occasional clap).

11:02 The nurses take her obs and all seems ok. We are to watch the mottling skin and monitor. 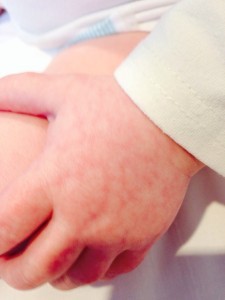 12:04 The doctors visit and check in. The blood transfusion last night was successful and Margot’s Haemaglobin count this morning was 92. In terms of timing, we are simply told that the BMT will occur ‘early afternoon’.

The doctors tell us that it will take 20-21 days for the bone marrow to settle in and begin repopulating. That’s when the blood numbers begin to improve and verify things are going as intended. The doctor was clear about one thing: Margot WILL get a fever during the next three weeks (apparently they just don’t see patients escape this) and that they’ll deal with it as and when it arises.

Both the nurses and doctors are coy about predicting much more about what lies ahead (every individual reacts differently) so we are suitably in the dark about what to expect next. In a way, that’s comforting. Ignorance is bliss after all. In another way, we feel a bit unprepared for what might come next. And the anxiety is needing to be kept in check.

13:13 Vitamin K (helps with clotting factors), metaclopromide (anti sickness), acyclovir (anti viral) being administered, the latter administered over the course of an hour. Which tells me ‘early afternoon’ is likely to quickly become ‘mid-late afternoon’ for the BMT (they won’t infuse both at the same time). Hmmm.

13:20 bone marrow cells arrive. It’ll take 10 mins to prepare and check before they’re administered. This happens when the nurses are still in the room. Margot is asleep. They tell me that they now won’t do the acyclovir until after the BMT. But they will do it later today. BMT usually takes 2-2.5 hrs depending on the volume.

The bone marrow has had the red blood cells removed (as much as possible) because the donors blood type is different from Margot’s – he’s A+ and Margot is O+ (for now, at least). This explains why the bone marrow is a pale red colour.

13:39 The nurses check all is in order & get the pre-meds ready: Piriton & hydrocortizone (Margot has allergic reactions to blood products and these meds help her receive them). 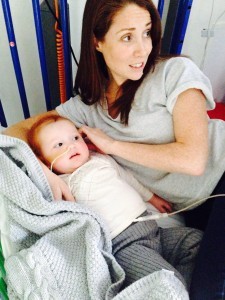 14:05 Margot is asleep in her pram and is hooked up to the blood bag containing the bone marrow. I press the button to start the infusion and we’re off.

14:28 Margot wakes up and lies on the bed with Vicki watching ‘In the Night Garden’.

So far, so good. A predictably unremarkable event, in spite of it’s vital significance. We’re hoping, and would of course be delighted, were it to remain so ! 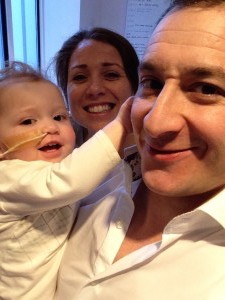 16:58 I leave Margot with Izabela & take Vicki with me to drop her off at the supermarket.

As we leave, the Russian doctor, Olga passes us in the corridor and stops to remark: “great stem cell donation !”

Margot’s donors stem cells had 18.5 million cells per KG; whereas 2.5m cells / KG is considered acceptable. “Donor did good job” she says, before carrying on her way.

We see the other two doctors before we leave the ward, also in the corridor. I repeat what we have just heard and ask what it means. We are told that “engraftment” usually occurs quicker if there is a higher number of stem cells per kilo.

The doctor confirms that they normally hope for 3 or 4 million stem cells per kilogram.

Our hero donor has just been elevated to ‘superhero’ status.

The doctor also tells us that Margot’s platelets will need a top up later today. Apparently she is likely to need more blood products over the next couple of weeks.

20:04 Vicki text: “Margot eventually doses off to sleep. She has been so restless.”

22:04 Vicki text: “Margot was quite distressed just now. I climbed into the cot next to her and she settled. Her bottom is sore so she wakes up if she poos.

Also she is having loads of meds tonight and platelets, so lots of messing with her and obs taken frequently.

She is sleeping again now so I will try to do the same. x”