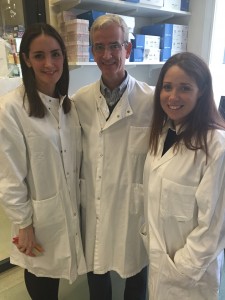 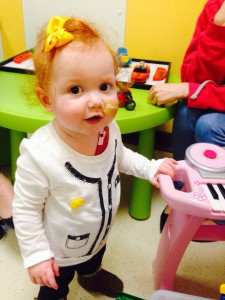 We met at the tissue culture labs which are in the building adjoining Great Ormond Street Hospital (GOSH). We arrived understanding very little about the project, except for the fact that it had my cousin Mazin’s endorsement. Mazin is an oncology specialist based in the USA and his input helped us in reaching the decision to fund the project because he considered the study proposal “an ‘elegant’ approach that is both innovative and well-intentioned, because it attempts to identify potential therapies that don’t necessarily need to break the bank. Identifying an old (usually, cheap) drug that might be specifically important for a defined disease is a noble cause that will never be funded by a drug company (since such companies are mainly interested in a novel agent that can be sold for $100K or more…)”.

Margot’s haematology consultant, Dr Phil Ancliff initially recommended this specific research project proposal by Dr Williams for the £60,000+ that we have raised for GOSH, primarily on the Bridge Walk 2014. The project is entitled:

Dr Ancliff first became aware of this project at the regular Leukaemic Group Meetings which are held as a joint collaboration between GOSH & the UCL Institute of Child Health. These meetings are where scientists & clinicians meet to present and discuss research work.

The project is one that has developed in conceptual terms over the years. Essentially, Team Margot’s Bridge Walk “bought” the ability to do the research (every Principal Investigator needs the people and materials with which to conduct the research) and without the money we donated, the project might never have got off the ground. So it was exciting to learn that the project has recently become “translational” i.e. it is almost ready to publish, following which the next step will be to get a clinical trial started.

The research project sets out to understand how certain cancer genes work and specifically MLL fusions – the ultimate aim is to enable MLL cancer genes to be targeted and eradicated. Although conventional chemotherapy has made a huge impact on the treatment of childhood leukaemia, alternative targeted therapies are urgently needed for leukaemia’s that are relatively resistant to chemotherapy, such as MLL-rearranged acute leukaemia. Margot’s leukaemia was resistant to chemotherapy, so this resonates with us. 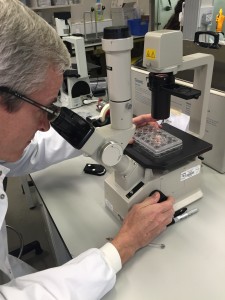 Dr Williams explained that with the MLL gene, in many infants you see a portion of the cell ‘chopped off’ and hooked on to another gene. This is called a translocation, which is a broken chromosome that’s healed in the wrong way. DNA breaks in chromosomes happen all the time as cells divide. So, it’s just bad luck that a break occurs and one gene incorrectly hooks up to another. The analogy was drawn with a typo in a book – if a typo occurs and doesn’t make any sense, it’s not an issue. But if a typo fundamentally changes the meaning of a word, then it can alter the entire story …

And in a similar way, if a translocation happens in a stem cell in such a way that it can completely change the cell, it can give rise to leukaemia.

Translocations are not inherited; they are not mutations ie they are not a genetic thing that will be passed down from parent to child, but instead they are random and unfortunate occurrences.

A translocation is what happened to Margot. Simply put, Margot was extremely unlucky. 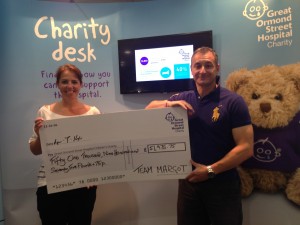 In the lab, the scientists took normal blood cells and introduced the cancer genes (two MLL fusions) and made leukaemia cells. Then, using a molecular trick they added a compound which causes the cell to differentiate and “switch off” the cancer gene. The research involves monitoring this activity – specifically which genes are turned on and which genes are switched off and then cross referencing with drug studies performed in the USA where they have introduced 1,300 existing & approved drugs and monitored the gene switching activity for each gene in turn, on a cell line.

Consequently, it has been possible to identify which drug has the same effect.

Interestingly, the drug that has been identified is well known and widely used for other ailments but the point in question is whether we can use it in an organism to rid specific cancer cells in the bone marrow ? 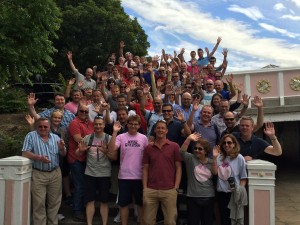 The drug targets the protein. And if you destroy the protein it kills the leukaemia, because the leukaemia cannot survive without the protein. In this way, the drug kills the root of the disease, which is very difficult to target with standard chemotherapy and / or Bone Marrow Transplant (in Margot’s case).

The applicability of this approach is massive if it can be proven to work and it can potentially kill other types of cancer as well. So conceptually, this is potentially hugely meaningful.

Dr Williams explains that this is amongst the most exciting work he has in terms of its proximity to publishing and a potential clinical trial – hopefully sometime later this year.

Once the research paper has been published, he will then need to demonstrate that the drug will kill refractory leukaemia (i.e. resistant leukaemia which has, for example, survived chemo).

Vicki asks whether the trials might begin with children or adults and he replies that it might well be in both. Myeloid leukaemia has very poor survival rates in adults, so there will be eagerness to trial with adults as well as with children.

As the research project moves on, Dr Williams will keep us in the loop – so hopefully there’s more positive news to follow in time.

And THANK YOU again to everyone who donated and helped fundraise for GOSH. 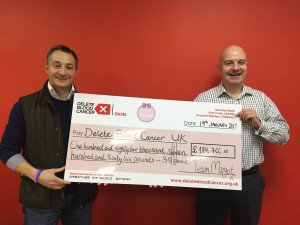 p.s. Bridge Walk 2014 also raised £37,068.69 for Delete Blood Cancer UK, which is included in this cheque – these funds have gone towards paying for the cost of new registrations (each registration costs £40)