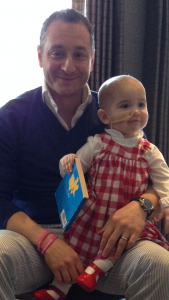 A year ago, Margot revealed that she knew the word ‘cuddle’

This blog post is a bit longer than usual. It charts some of our thoughts during the course of about a week, this time last year. At the time, we had become concerned when Vicki noticed some ‘tell tale’ signs that the disease might have returned.

In the event, it was another month or so and two bone marrow aspirates later when we learned of Margot’s ALL (Acute Lymphoblastic Leukaemia) relapse. It was a few weeks after that when Margot’s AML (Acute Myeloid Leukaemia) also returned.

Nevertheless, the excerpts below will provide some insight into how a patient post Bone Marrow Transplant (BMT) really needs to understand medical practice and opinion and importantly, to listen to their body. There’s a need to manage the situation as best as possible, all the while ‘living with’ the fear that the disease might return.

All being well, the patients post BMT journey is fraught with uncertainty.

And it’s a welcome possibility only if a donor match can be found.

We miss you Margot. x

Margot is proving to be a little bossy boots – she senses that the the world currently revolves around her – and has a growing number of expressions in her repertoire which she trots out as required. She usually gets what she wants.

She is great fun to be around and her confidence is growing & showing every day. 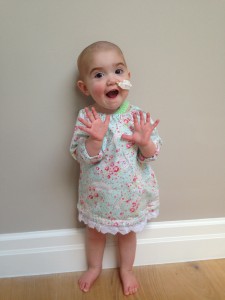 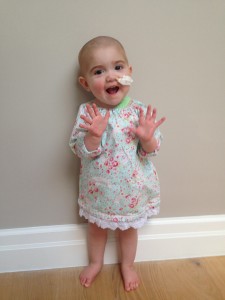 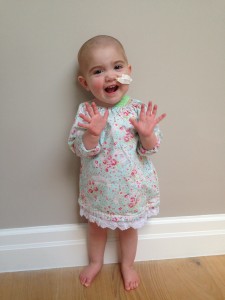 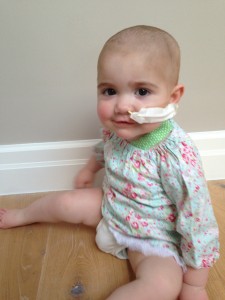 Yesterday we completed a week of oral meds that were being applied to the inside of her mouth and hopefully this has neutered the suspected bacterial / fungal growth. It might be coincidence, but her appetite is improving little by little too. 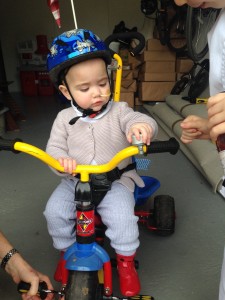 Margot decides she wants to go on a bike ride

Margot has had a bit of a rash in the nappy region since coming home and it’s not going away. In fact, it now looks like it may be getting worse. I’ll spare you the photographs but it’s something to pick up with the community nurse on Monday. I don’t believe it’s graft v host and hopefully an appropriate cream will do the trick.

In the meantime, Margot’s hair is increasingly beginning to show signs of her natural red colour…

We had a bit of a panic earlier today. Margot’s rash is spreading around her nether regions but the main worry is that there is a pin prick rash around her head. Plus she has been bruising on her legs (she IS crawling around quite a lot and being quite rumbunctious) and Vicki noticed she was sweating overnight. These are similar observations to the ones Vicki noticed last summer, pre diagnosis.

The community nurse came this morning and took bloods, changed the NG tube and did a check up. She seems to think Margot has thrush (which could explain the rash).The GOSH ‘lewd watch’ team would have been busy today – there was a photo of Margot’s privates circulating. 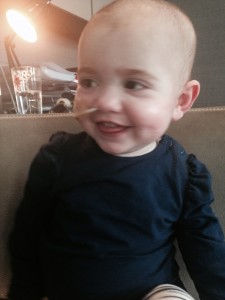 On learning of our concern, later in the day the head of BMT at GOSH reviewed Margot’s file and sent word back that he wasn’t concerned.

This afternoon, I receive an email from Rachel who reports on Margots blood numbers. Her Platelet count was 74 – this is the only one of the blood counts that’s a bit off; but there’s nothing there to cause concern.

One of the BMT Dr’s will review Margot tomorrow morning on Safari Ward. They will also swab her rash and send for testing.

Some miscommunication yesterday with GOSH and re-reading through emails it’s apparent that they missed the fact that Margot now has a pin prick (non blanching) rash on her face. That, coupled with the sweating and bruising and suddenly mothers instinct is telling Vicki that there’s a serious problem, in spite of what yesterdays bloods say.

So we are keen to establish what’s what with the doctors today during our visit to GOSH.

The next bone marrow aspirate is scheduled for next week (6 May). It could feel like a very long week.

We arrive at Safari Ward daycare – all obs normal.

The doctor arrives soon after.

She says that she doesn’t think there is a problem, however she accepts that it is possible that the disease might be undetected in the blood whilst present in the marrow. That said, she believes this is unlikely.

Again: the bone marrow aspirate test is definitive. The test results may take a week to come back.

The doctor sees the pin prick rash and explains that it is something that occurs when platelets are low (74 yesterday). Again, she stresses that this doesn’t mean leukaemia is present.

As to the bruising, platelets at 74 are low enough for easy bruising.

So – net net, no immediate cause for concern.

Vicki asks: are you satisfied that the amount of the GVHD that has presented is sufficient ? The doctor is unfazed. This is a good BMT patient at Day 68.

Platelets at 74 is not in itself a cause for concern.

There’s no cause for an early bone marrow aspirate procedure. However she will check to see if there have been any cancellations.

Margot’s platelet level is not a concern. The number of her platelets will go up and down and we should continue to monitor weekly as a matter of course.

Her ALT score at 69 is also a non-issue. Yes, it’s slightly higher than normal, but not sufficiently so to cause concern.

Ciclosporin levels in the blood are good (this is the immune suppressant drug) – we are to continue with the same 0.5ml dose, as we are for the time being.

Margot is booked in for her bone marrow aspirate on Tuesday afternoon and we are to go into GOSH that day, to arrive at 11:30am. The MRD (Minimum Residual Disease) test results are likely to take a week to come back to us.

Engraftment results may come back to us later today. 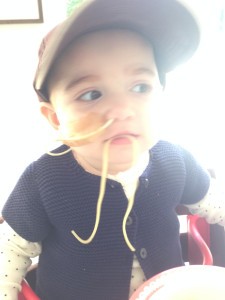 Margot does her Master Shifu impression… 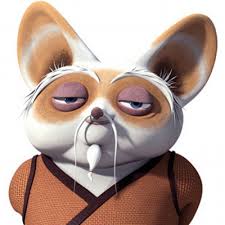 This augers well for the bone marrow aspirate, which remains the definitive test.

Brilliant news and just in time for the Bank Holiday weekend.