Nor do you know me

We’ve been accused of naivete for trying to run a charity based purely on unpaid volunteers – and we’re sure there is at least an element of truth in that; no doubt most, if not all charities began in much the same way.

However, to even attempt to do what we are doing, you do need to have sufficient numbers of unpaid volunteers !

Fortunately, we are blessed with this support from all corners of society & from all around the world. Below is a guest blog from Team Margot Denmark, where there is a lot of positive work underway – this is after all a global issue.

Like so many of you, Lars came to us out of the blue – we’ve never actually met & I didn’t know him before, nor does anyone else in my network of friends & family – it’s one of the wonders of social media and the ‘open and accessible’ world that we live in today.

Margot’s ability to reach out and touch people continues to make a difference.

Thank you all for helping to keep her energy and inspiration alive.

you do not know me nor do I know you. Being used to navigate the net since 1997 I have not seen so touching a message as yours. I would like to help (…)”.

These were the first words that I communicated to Margot´s father in January 2014.

Watching the trials, ups and downs of Margot during 2014 – and following the last months of her life, I simply wanted to aid the Martini’s the best I could.

I had cried as I saw the appeal video in December 2013 – and almost 1.5 years later yours truly, bald, (sometimes scary) Scandinavian Viking still gets very emotional looking at it.

This sensitive behaviour comes from the fact that I gradually came to feel that I knew Margot during 2014.

As another Team Margot follower wrote: “Margot was the person that I never met that I feel I know the best”.

Through the emotions an idea came to me:

Margot´s endeavors and those of her loved ones might help others in the same situation:
People desperately needing a stem cell donation!

Maybe an effort in Denmark could raise the awareness of the chance to save another person´s life in Scandinavia? – And providing more people registered on the worldwide stem cell register in the Netherlands.

We do have the logistics, the organizations and setup to do the stem cell donations flawlessly.

We need to get rid of the many old wives tales about the process of giving the cells:

“If you are tested, the doctor will (without sedation) press a gigantic needle down your spine”

None of these are true – but they are what one faces when asking randomly picked Danes about how to donate stem cells, thus shrouding the reality in much mystery.

And apart from these stories the idea of needles in the arm is highly likely to scare away potential donors (only blood donors are allowed to donate stem cells).

1. Spreading the correct word about how to donate vs. the old wives tales

2. Changing the testing procedure from blood sampling to mouth swabs

And now back to the chronology – and really fast-forwarding through what happened from January 2014 to April 2015. 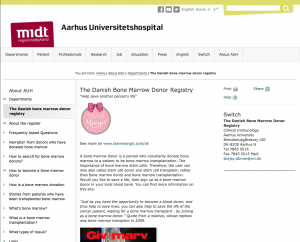 2. Being supervised by DKMS in Germany to avoid having to reinvent the wheel.

We plan to support changes in the Danish system. The plan is gradually forming – but it is a large system – and fortunately we are in contact with the decision makers.

I am excited to see what our efforts will lead to – everything points at a success in spreading the word through helpful Scandinavians and via a system willing to change.

Thank you to the Danish Register for wanting changes and thank you to DKMS for helping out.

I am proud to serve Margot’s legacy and honored to be allowed to participate in the fight to find more donors.

Margot keeps on having an effect on everyone who comes into connection with Team Margot.

Her legacy carries on – and her legacy will make sure that more lives are saved due to more new potential stem cell donors – signing up because of Margot’s impact.

May she help us on from above.